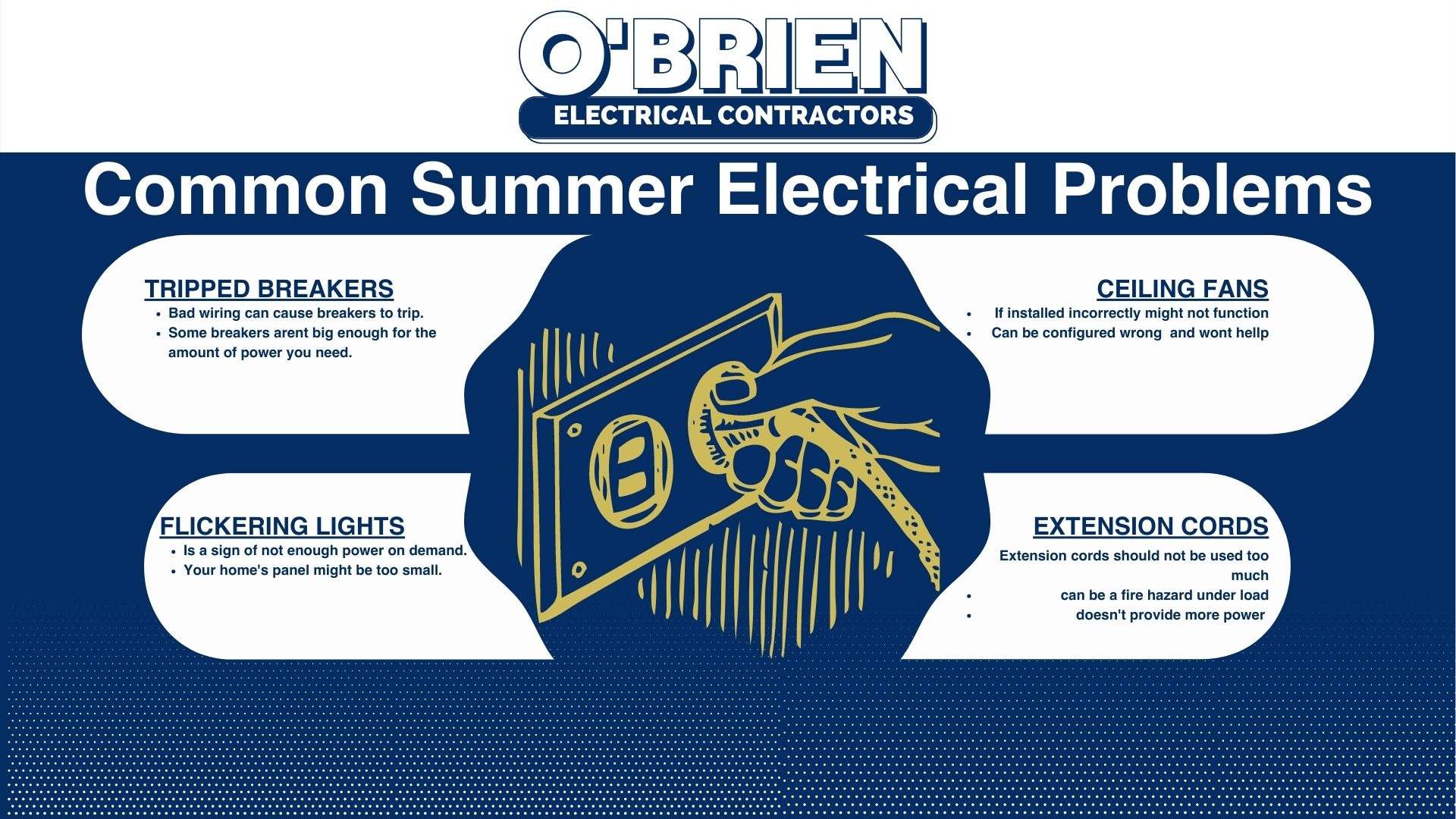 Summer is in full swing here in Denver, Colorado and you may have noticed some issues with your appliances, tech, and electricity. Did you know that Summertime has increased electricity usage across the state? That also means your home may be working overtime putting stress on your electrical systems. You may be experiencing the telltale signs of these five common summer electrical problems already! If you are, reach out to O’Brien Electrical Contractors for a speedy and effective solution. Without further ado, here are five common summer electrical problems:

If you are trying to plug a device into a wall outlet or turn on an appliance and the power suddenly goes out for the room, chances a circuit breaker was tripped. When a circuit breaker “trips” the flow of electricity is stopped at the electrical panel, preventing any more electrical usage. The reason this happens is because the amount of power demanded when using a device plugged into an outlet or connected to the electrical system is too much for the breaker. In order to stop any damage the breaker will trip. During the summer, homes will have a few more devices and appliances plugged in than normal. Consider the air conditioning system, any fans in operating, and smart devices. All of these add up and will be a larger burden on your electrical systems load.

You might be able to expand your electrical panel to separate outlets so that power is more evenly distributed. This may require some upgrades to the original wiring which is why contacting an electrical contractor near you will be the best option.

Installing a ceiling fan is a common task homeowner take on during the summer. Sometimes homes just need an extra bit of circulation to keep things cool. But if a homeowner is not knowledgeable about wiring and hanging electrical fixtures it can become a very common summer electrical problem.

If a fixture is not wired correctly its functions might not work properly, such as the lights not turning on or dimming. In addition, the fan might not work at all if the new wiring involved was not running correctly. Sometimes a ceiling fan can be running just fine but is blowing in the opposite direction which is not useful at all for the summer months. That last one can be fixed easily by locating the reverse switch typically hidden in the fixtures case. But for the others, a quick visit from an electrician or professional will be able to have a ceiling fan installed in no time.

Air conditioners can sometimes take up a lot of power, especially when they are turned on. Homeowners may report flickering or dimming of lights when a central air conditioner is powering up. This is also true for other devices that suddenly demand power from your electrical system. Home theaters, computers, vacuum cleaners, even electric stoves, and microwaves. If you notice that your lights dim or flicker then your home might need a panel upgrade or have some of the wirings inspected. Whatever the case might be, contacting your local electrician is the best way to find the source of the problem.

Extension cords should only be used temporarily or at best only facilitate one electrical device at a time. Adding multiple devices to a single cord or power strip can create a fire hazard when the cord is under a high load. Your home’s electrical panel might have room to add additional breakers and supplies. This opens the option up for homes to add additional outlets in certain rooms where more devices are needed. Especially in older homes, this is a common summer electrical problem that can easily be fixed by a quick electrical home repair service call.

Summertime is a very taxing time of year on your home’s electrical systems, which is why many of these problems come up compared to any other season. Summer sees a large increase in electrical use per household. If your home hasn’t been inspected or updated in a very long time, you could be seeing a degrading performance in your devices and even outages. Obrien electrical contractors are always available to the Denver metro area and are more than willing to help resolve any summer electrical problems you may have.

O’Brien Electrical Contractors are your source for all electrical installs and repairs. Call us today at (303) 463-1800 or reach us through our contact form for immediate service!